These street art pieces convey such powerful messages, they may make you re-think the way you live your life. Combined with famous quotes about culture, and society these murals communicate even stronger messages.

These somewhat subversive works of art pull the curtains from post-consumerist society, revealing what’s truly important in life. Which is why you haven’t learned about these mindblowing ideas at school, nor do you see them in mainstream media such as television or magazines.

Think twice about what makes you happy

“You can only become truly accomplished at something you love. Don’t make money your goal. Instead, pursue the things you love doing, and then do them so well that people can’t take their eyes off you.” ―Maya Angelou “Money has never made man happy, nor will it; There is nothing in its nature to produce happiness. The more of it one has, the more one wants.” ―Benjamin Franklin

“Open your eyes, look within. Are you satisfied with the life you’re living?” ―Bob Marley

“The pleasantest things in the world are pleasant thoughts: and the great art of life is to have as many of them as possible.” ― Montaigne

“The greatest crimes in the world are not committed by people breaking the rules but by people following the rules. It’s people who follow orders that drop bombs and massacre villages.” ― Banksy 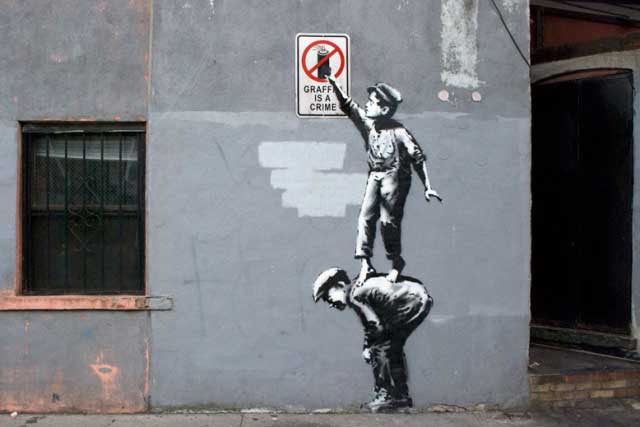 “Unthinking respect for authority, is the greatest enemy of truth” ― Albert Einstein.

March to the beat of your own drum “He Who Marches Out Of Step Hears Another Drum.” ―Ken Kesey

“You’ll learn, as you get older, that rules are made to be broken. Be bold enough to live life on your terms, and never, ever apologize for it. Go against the grain, refuse to conform, take the road less traveled instead of the well-beaten path. Laugh in the face of adversity, and leap before you look. Dance as though everybody is watching. March to the beat of your own drummer. And stubbornly refuse to fit in.” ― Mandy Hale, The Single Woman: Life, Love, and a Dash of Sass

Consider what keeps you from living life on your own terms

“There is only one important point you must keep in your mind and let it be your guide. No matter what people call you, you are just who you are. Keep to this truth. You must ask yourself how is it you want to live your life. We live and we die, this is the truth that we can only face alone. No one can help us, not even the Buddha. So consider carefully, what prevents you from living the way you want to live your life?” ― Dalai Lama XIV “You are what what you eat eats.” ―Michael Pollan “We’re all moving at such a high rate that we have to grab frozen dinners and McDonald’s. We can’t make it a way of life – we have to get back to real, simple, clean good foods. It will save our lives on so many levels; not just spina bifida, but obesity, diabetes, everything. Food is our medicine.” ―Nicole Ari Parker “If you believe the noises of the world, rather than the silences of your soul, you will be lost.” ―Neale Donald Walsch

“Find happiness in stillness, not in using and consuming things.” ―unknown Buddhist monk “We are offered to watch a string of empty-minded shows that are designed as entertainment but function to distract people from understanding their real problems or identifying the sources of their problems. Instead, those mindless shows socialize the viewer to become a passive consumer. One way to deal with an unfulfilled life is to buy more and more stuff. The shows exploit people’s emotional needs and keep them disconnected from the needs of others. As public spaces are more and more dismantled, schools and the relatively few public spaces left work to make people good consumers.” ―Noam Chomsky

Or at least realize TV hypnotizes you “It’s no wonder we don’t defend the land where we live. We don’t live here. We live in television programs and movies and books and with celebrities and in heaven and by rules and laws and abstractions created by people far away and we live anywhere and everywhere except in our particular bodies on this particular land at this particular moment in these particular circumstances.” ― Derrick Jensen

“Experts in ancient Greek culture say that people back then didn’t see their thoughts as belonging to them. When ancient Greeks had a thought, it occurred to them as a god or goddess giving an order. Apollo was telling them to be brave. Athena was telling them to fall in love. Now people hear a commercial for sour cream potato chips and rush out to buy, but now they call this free will. At least the ancient Greeks were being honest.”  ― Chuck Palahniuk, Lullaby 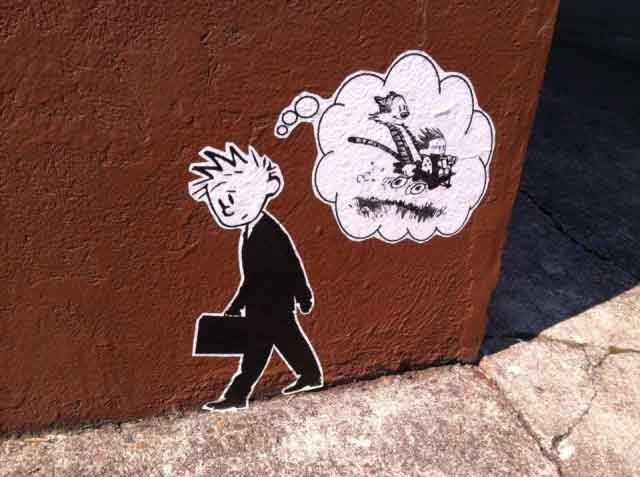 “The goal of the future is full unemployment, so we can play.” ―Arthur C. Clarke

“Time is your most precious commodity and yet most of us live our lives as if we have all the time in the world.” ―Robin Sharma

“The dominant power we live under is not democracy or some other noble ideal – it is consumerism! And we are constantly encouraged by this power to be dissatisfied with our present lives and circumstances. We are bombarded daily by messages which exhort us to desire and to buy more, and more and more. A spiritual renegade should not strive to become well adjusted in a society where the economy is powered by discontent. We’re going to have to fight the power if we want to be happy. We’re going to have to resist the siren song of consumer capitalism.” ― Lama Marut, A Spiritual Renegade’s Guide to the Good Life. “Are these things really better than the things I already have? Or am I just trained to be dissatisfied with what I have now?”  ― Chuck Palahniuk, Lullaby

Be critical as to which corporations you support “Growth for the sake of growth is the ideology of the cancer cell.” ― Edward Abbey

Consider stepping back from the system

“If anarchists are idealists, they may simply be likened to someone who finds himself swimming in a cesspool and, rather than paddling about looking for the area with the least amount of floating feces, seeks to climb out of the pool completely.” ―Robert Higgs “I have often been asked why I maintained such a non-compromising antagonism to government and in what way I have found myself oppressed by it. In my opinion every individual is hampered by it. It exacts taxes from production. It creates tariffs, which prevent free exchange. It stands ever for the status quo and traditional conduct and belief. It comes into private lives and into most intimate personal relations, enabling the superstitious, puritanical, and distorted ones to impose their ignorant prejudice and moral servitudes upon the sensitive, the imaginative, and the free spirits.

Government does this by its divorce laws, its moral censorships, and by a thousand petty persecutions of those who are too honest to wear the moral mask of respectability. In addition, government protects the strong at the expense of the weak, provides courts and laws which the rich may scorn and the poor must obey. It enables the predatory rich to make wars to provide foreign markets for the favored ones, with prosperity for the rulers and wholesale death for the ruled.

However, it is not only government in the sense of the state which is destructive of every individual value and quality. It is the whole complex of authority and institutional domination which strangles life. It is the superstition, myth, pretense, evasions, and subservience which support authority and institutional domination.

It is the reverence for these institutions instilled in the school, the church and the home in order that man may believe and obey without protest. Such a process of devitalizing and distorting personalities of the individual and of whole communities may have been a part of historical evolution; but it should be strenuously combated by every honest and independent mind in an age which has any pretense to enlightenment.” ― Emma Goldman Open your eyes – Become aware of the insanity

“In this epic moment of radical environmental and social disruption, the world is experiencing the dawn of a revolutionary transformation to becoming an ecologically literate and socially just civilization. The existential gauntlet is to make the shift fast enough to outrun global cataclysm. The next five or six years will be the once-in-a-civilization window to change course. We can move from breakdown to breakthrough.

The Mayan people call this the “Time of No Time.” From here on, we’re on Earth time. Mother Earth is shaking to her core. It’s a time of madness, disconnection, and hyper-individualism. It’s also a time when new energies are coming into the world — when people are growing a new skin. The Mayan vision says we in the West will find safe harbor only if we can journey past a wall of mirrors. The mirrors will drive us mad—unless we have a strong heart.

Some mirrors delude us with an infinity of reflections of our vanity and shadows. Others paralyze us with our terror and rage, feeding an empire that manufactures our fear into resignation. But the empire has no roots and it’s toppling all around us. In this time, everyone is called to take a stand. Everyone is called to be a leader. To get beyond the wall of mirrors, the final challenge is to pass through a tiny door.

To do this, we must make ourselves very, very small. To be very humble. Then we must burrow down into the Earth, where indigenous consciousness lives. On the other side is a clear pond. There, for the first time, we’ll be able to see our true reflection. In this Time of No Time, we can go in any direction we want—by dreaming it. Our dreaming can shift the course of the world. Paradoxically, the crisis confronting us today is precisely the dream of our current civilization.

That dream of endless growth, hyper-individualism and domination has turned into a nightmare. How do we dream our way out of a nightmare? One way is to wake up. All over the world, people are awakening to a new dream. We’re re-imagining a civilization in the Age of Nature that honors the web of life, each other and future generations. It’s a revolution from the heart of nature.” ―Kenny Ausubel 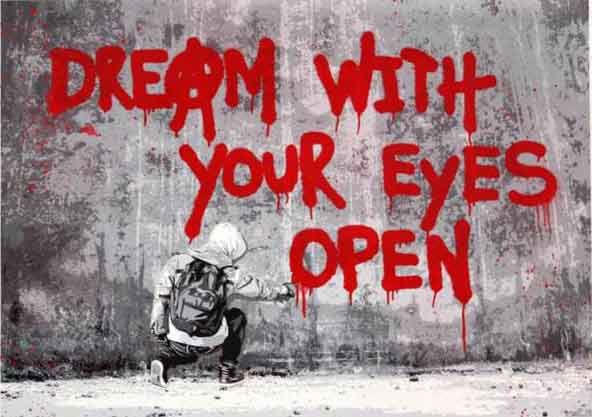 Let’s focus on what matters 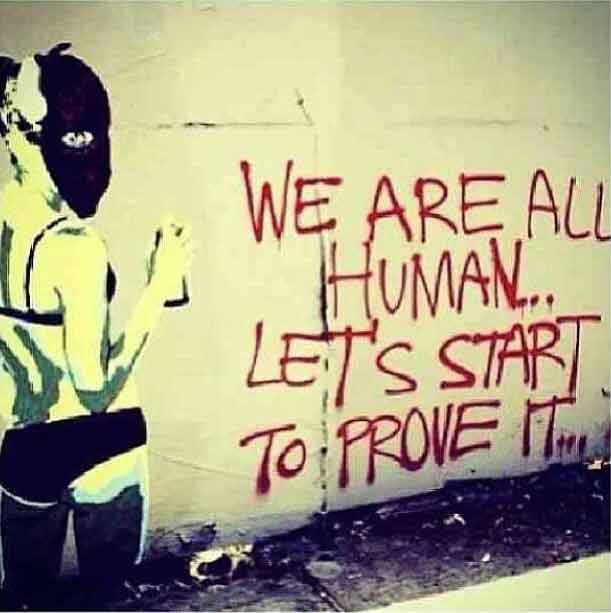 “We’re gonna stand up, and we’re gonna be human beings. We’re gonna get fired up about the real things, the things that matter! Creativity, and the dynamic human spirit that refuses to submit.” ― Waking Life

This post is based on a mindblowing street art and quotes collection by Under The Blue Door. Most Shopping Is Excessive