Picture this. You hear someone talk about self sufficiency. An image of a little wooden cabin on the wide open tundra pops up.

You keep listening and it turns out to be about someone living a pretty self-reliant life in a Manhattan condo.

So much for stereotypes huh.

The bottom line is that often, in this context, we think of rural settings.

Being self sufficient however, is not the exclusive domain of back to the landers and bushcrafters. It can be practiced in the city too.

The skills of resourcefulness, of being frugal, of making use of your surroundings, and providing basic needs such as water, food, and power aren’t wasted on urban dwellers either.

As a matter of fact, city slickers can do a lot when it comes to reducing their dependence on the system. Here a few ways to be more self-sufficient with food. Hunting in the city could be met with some resistance but gathering and fishing are likely to offer less friction among fellow urbanites. Learn how to fish, to gut and to cook your fresh catch.

Make sure to know where you throw your rod and which types of fish you eat. Even various types of sea fish are toxic so better skip that little stagnant canal in the industrial area.

If you really dig hunting you can always go on rural weekend trips. If you learn to skin,flay, and smoke the meat you can take it back to your apartment and have honest meat for months or longer. Just like the gals might do when you hit ’em with your line you yourself may initially turn your nose up for taking the dive. However, when you find an abundance of tasty fresh produce, expensive perfectly edible packaged cheeses, and other delicacies you may change your view.

Learning to cook from scratch Cook from scratch. Use basic ingredients and you will know how to make most out it when you only have a few ingredients at your disposal.

It will allow you to make sauces, soups, gravies, bread, and other foods without store-bought packets.

Learning to cook really is one of the best investments you can do. It will keep you well-fed and your less culinary educated peers will slightly nod in admiration every time you conjure a tasty meal out of -in their eyes- almost nothing.

Growing your own produce

Yeah, I know, I can hear you think, growing veggies and stuff is nice and all. But who has time for that? Really? Staking beans, watering sprouts and pruning tomato plants?

In the middle of big city commotion with its bustling events popping up on each street corner and demanding social life there are better things to do with your sparse free time right?

Maybe you should reconsider. There’s a wide range of low-maintenance edibles you can grow. Crops that don’t need much labor and will safe you money too. And in the process, chances are you may start to like rooting in the dirt on your knees too.

On top of that, community gardening may be a nice way to get to know some folks in the hood. Guerilla gardening could offer you some of the subversive satisfaction you were yearning for. Or perhaps a vertical balcony food system could meet your compulsive tiny home efficiency needs. Your ability to grow food in town may be limited but preserving it is a viable option no matter where you live.

And wouldn’t it make for a delightful Saturday afternoon activity?

After your visit to the farmers market you make your stop downtown to meet up with your punk rock friends for a vegan kimchi taco and kale smoothie at the food truck.

Then it’s time to wipe the yogurt sauce from your beard and head home for some serious pickling and canning.

Jugging and jellying as well as the various other food preservation techniques allow you to keep food tasty and healthy.

Also nice, tonight at that party, nonchalantly dropping you lyed some century eggs this afternoon, will work well with the chicks.

These are obviously just a few ideas related to your food supply. There’s so much to learn and do. Some other things to ponder are getting a sewing kit so you can fix clothes, make bags etc.

Learn to make soap since, well you know, soap is the yardstick of civilization. But seriously, personal care soap, laundry soap, dishwashing soap and shampoo will bring your life standard to a higher level in case things are going real bad.

You could also consider switching your paper coffee filter using machine for a french press or percolator. Using cloth instead of paper towels and napkins is something you could have started with yesterday. Don’t forget to look into solar and wind power.

A quick note: (this is dead serious stuff)

The tone of this post may be somewhat corny but the scope however is rather significant. Did you know for example that in the average city food reserves will be depleted within four days when the shit hits the fan? Anarchy and total lawlessness are closer than you think.

Securing your position regarding supplies and self-reliance makes sense. Whether you live on the countryside or in the city. Decluttering Declutter Advice – The 16 Best Tips To Unclutter Your Home 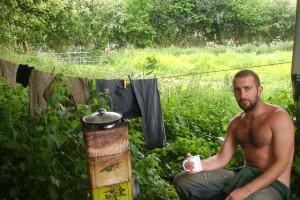 How To Adopt The Minimalist Lifestyle Without Becoming a Freak