Warning! These inspiring #VanLife videos will cause irresistible wanderlust. Watching the jaw-dropping landscapes and care-free lifestyles will make you want to quit your job, roll the tarmac, and take the high roads to happiness.

1. Mesmerizing road trip through the deserts of South-Western USA

This van dweller has been living in his van for the past 10 years. The freedom of having no landlords, rent payments, and security deposits while traveling for film projects and surf trips did prove a winner. When the expanding, dune sands of the California desert is your backyard, it’s hard not to feel like the richest person in the world. Cyrus Sutton and his girlfriend Anna travel around in their fully-packed van, touring California’s best surf spots and film locations for his business, making plenty of memories along the way. Cyrus and Anna use filming locations that are all close to their hometown, so family is never very far away. Cyrus’ videos show just how beautiful desert landscape can be, from the Antelope Canyon’s swirling paths to the bright blue waters of Havasu Falls.

For 21-year-old Daniel Norris, living in a van is not only about saving money; it’s a journey of self-discovery. However, when most people find out what he does for a living, they’re astounded to learn that he’s an up-and-coming pitcher who just signed a $2 million contract with the Toronto Blue Jays.

Daniel explains that leading a simple life is the way he was raised, and that money just isn’t that important to him. He takes it all in stride when his teammates poke fun at him, but since he started living life by his own code, this young baseball player is the happiest he’s ever been.  More on the Van Man.

Fergus O’Donnell is anything but sheepish when it comes to opening up about the van that he calls home. After nearly losing his life because of the wild nature of the Manchester party scene, where drugs and alcohol took over, he decided to take up surfing. Fergus rolls along from job to job and seems like more of a vagabond than someone who’s chosen the van life, but this colorful character has discovered a lot about himself during his mobile residency. When he’s not between jobs or surfing, this songbird kills time jamming out to the twang of his ukulele.

While most stories of van life are about adventurous loners who find solitude in the beauty of nature, only communing with others every now and again, Foster Huntington is different. Instead of living a solitary lifestyle, Foster has gathered together an entourage of fellow van residents who travel with him around the country in a sort of caravan.

This happy troupe is a community that helps one another with anything from van repairs to cooking family dinners to emotional support for a life on the go. Huntington himself is the original #vanlife hashtagger and acts as a sort of leader and motivator for the group.

5. Adventure photographer converts his granny’s van into a mobile home and office

The allure of the open road has been a strong call for freedom to those who want to lead a more nomadic lifestyle. Travis Burke, an adventurer photographer, decided to live the van lifestyle after receiving a 1994 Dodge Ram Van from his grandmother.

The affectionately-named “Adventuremobile” has been converted to a camper van to fit in everything that Travis needs for daily living, including earth-friendly solar panels that power the various equipment he uses for photography. A free spirit, Travis enjoys traveling around in his new home, taking in the sights and sounds of nature and the wide open road and has been clocking 60,000 miles so far.

You may also like: the best documentaries on nomadic living. 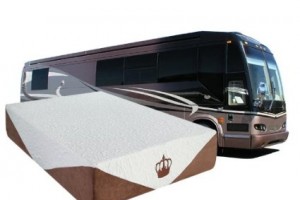 14 Reasons To Travel The World In A Van